"Dave Ja Vu" - That Strange Feeling You Get When You Think You've Used That Joke Before... 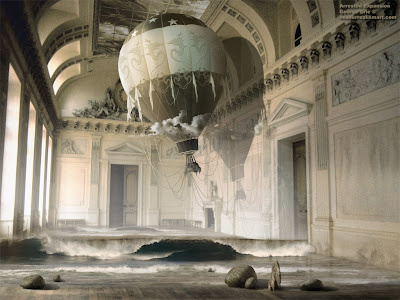 Well, howdy, fellow space travelers! It's Friday the 13th... do you know where your butcher knife is?

It was a dank and drizzly day today... of course, everywhere else in the country, I'm sure it was an icy, windy mess, so I shall smugly count my blessings. San Diego has it's advantages, that's for sure. Didn't stop me from daydreaming about moving out of California though... the state's full of wackos and nutters. And I'm one of them!

Got some work done today for a client of mine... at the expense of the project for another client that they wanted today. Gonna have to get on that one right away tomorrow. I have the distinct impression that the deadline for that project was arbitrary anyway, so I think it's all good.

Got a (pay)check in the mail today, so I was able to give my bank account a small sip. Better than nothin'. Plus, it allowed me the cash to take wifey out to dinner tonight and buy her a small Valentine's Day gift. Nothing says "I love you" like the gift of an eyelash curler. Hey, it's what she wanted! Cut me some slack! After 18 years, you get practical when it comes to gift giving.

I decided to shelve Stephen King and read Ender's Game again. Zipped through the first 100 pages last night. Man, what a great book. If you've never read it, I recommend it highly. It's relatively short and it's an easy read. I was thinking of giving it to kid #2 to read - she's 13 years old, and quite a voracious reader. I think she might like it. Not that it's a "young adult" level book - it's definitely strong enough for "grown ups". It won the Nebula Award (Best Novel 1985) and also the Hugo (same), which is pretty impressive, methinks. Good book.

I hear that the story of trying to get a movie made of the book is legendary for some reason - sort of like my other favorite book, Gates of Fire by Steven Pressfield. For some reason, trying to get both of those movies up on screen has been exceptionally difficult. If I ever find out why (in either case), I'll relay it here, on the off chance that such info would be as interesting to you as it is to me...

I don't really have an official "Favorite Scene" for you tonight, as far as the lame intro and the narcissistic self-filmed bits, but I will post another clip from Duck Soup for your enjoyment.

Wish I had an amusing anecdote for you, but alas, I do not. So I will end it here for the day.

Until tomorrow, remember, it's not an optical illusion, it just looks that way...
Posted by David Wagner at 9:03 PM